At 11.30 pm in the UK the Eurovision Song Contest has just finished, and the favourite, Sweden, romped home with a rather lumpen and tuneless disco dirge that somehow captivated the hearts of the 42 competing nations. At least we didn’t have to stay up until 3.30 am, which is what it is in the host country of Azerbaijan, where the annual festival of cheese didn’t start until midnight their time.

Engelbert Humperdinck kicked off proceedings for the UK with an inoffensive ballad which didn’t really do anything, and garnered just enough votes to put him second to last, fractionally ahead of Norway, whose song I can’t remember either.

The Russian Grannies ended up over a hundred points behind but still in second place, and put in an exuberant performance having added the presence of a great big oven from which they produced a large tray of biscuits just ahead of the final chorus, which must have been glued down given the enthusiasm with which the eldest of their number was dancing around with them. The clip I posted before now has very nearly three and a half MILLION hits, this live version has almost half a million already. They were robbed.

Serbia came in third with a rather serious sounding ballad, which translated as something like “Love Is Not a Thing,” if memory serves, delivered in a stentorian baritone by a man in a suit.

I have been watching the Eurovision Song Contest since about 1971, which means that, even allowing for the years when I have had other demands on my time, I have devoted something like a whole week of my life to the event.

Once upon a time, in a galaxy far away, there were a group of European countries, who just ten years previously had either been at war with one another, occupied by or occupying one another, or keeping out of it by pleading neutrality. An organisation based in Switzerland called the European Broadcasting Union put forward the suggestion that an international song contest should be held, primarily to test the limits of live television broadcasting technology, but also to promote international harmony.

And so in 1956, in Switzerland, seven countries tested the technology, and ever since then, on a Saturday evening in the Spring, Europe pauses to come together in a festival of music to unite the continent.

By the time I became aware of the competition, sometime around 1970 or thereabouts, it was well established, and the format had shown itself to be quite adaptable, with an increasing number of nations taking part. The national broadcasting organisation in each participating country is fairly autonomous, so I can only attempt to describe the Contest through a British pair of eyes.

I have a compilation of every winner since 1956 (including all four tied winners from 1969 – they ran out of medals and after the Contest had to go away and work out how to stop it happening again), which I have been known to play on long car journeys.

As a service to the Hall I have edited the highlights among the winners down to just under eighteen minutes. The sound quality is highly variable, but I am sure that this will be the least of the worries of some Townsfolk when faced with some of the music contained herein.

Early in the year, each broadcaster selects, in whichever way it sees fit, an artist and a song to represent the country. In the early 1970s the British entry was selected through the Cliff Richard Show, with somebody like Olivia Newton-John, The Shadows (without Cliff), or Cliff himself singing a song each week and viewers would vote for the song they preferred, which would then proceed to the Contest. If I remember correctly, this was done by viewers cutting out a coupon from the Radio Times (the BBC’s TV listings magazine, in existence since before telly – hence the title) and posting it to the BBC. This was in the days when British homes tended to have small black and white televisions, but tended not to have telephones, so it probably was the most democratic selection process available at the time. I remember my Grandma telling me in no uncertain terms that she wouldn’t waste her money on the Radio Times, so I don’t think we ever voted.

From very early on in its history, the Contest has been hosted by the winner of the previous year’s competition. Every country works to put on a show more impressive than those which have gone before, a bit like the Olympic Games, which inevitably costs quite a lot to stage, but works quite well unless a country has a winning streak for several years. In the 1990s, Ireland won it 3 years on the trot, and again a couple of years later, and their Government were seriously concerned that the Irish economy would collapse if it had to pay for another one – at which point they decided to ensure that they selected a song which couldn’t possibly win. This may at first glance appear quite straightforward, in a “Springtime for Hitler” sort of way – but doesn’t always pay off. I’ll get to the songs themselves in a bit.

We here in the Halls of Rock Town are sometimes taken to task for being overly negative, snarky, hyper-critical, and all too often, just downright rude. As part of our collective efforts to bring a bit of sunshine and light to the world wide web, we occasionally make an extra effort effort to find something good to say about, you know, stuff that is clearly godawful.

It is in that spirit that we embark on yet another effort to bring some positivity to our proceedings. Please spend some quality time with the video above, then—if you can—please find something nice to say about it. You’ll feel a whole lot better, I promise you.

With less than 3 months to go, I am getting very excited about the prospect of this year’s Eurovision Song Contest!

The behind-the-scenes activity is already hotting up, with 75-year-old Engelbert Humperdinck lined up to represent Great Britain. He must be gutted that his place as the oldest person to perform in the Contest will immediately be usurped by 76-year-old Natalya Pugacheva from the Buranovo Grannies, whose husband is apparently very cross that she is going away to represent her country and he will need to find someone else to milk their cattle during the competition.

Today’s exercise in playing nice is courtesy of Townsman chergeuvarra.

We here in the Halls of Rock Town are sometimes taken to task for being overly negative, snarky, hyper-critical, and all too often, just downright rude. As part of our collective efforts to bring a bit of sunshine and light to the world wide web, we occasionally make an extra effort effort to find something good to say about, you know, stuff that is clearly godawful.

It is in that spirit that we embark on yet another effort to bring some positivity to our proceedings. Please spend some quality time with the video above, then—if you can—please find something nice to say about it. You’ll feel a whole lot better, I promise you. 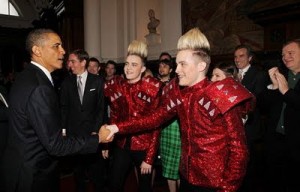 Somebody sent me a copy of the photo above, obviously meaning to get my dander up. My obvious first question, as I’m sure it was yours, was “who the hell are these two idiots, and why is my President shaking their hand?”

Turns out they’re the latest manufactured pop idols from across the pond — Ireland, I believe — and they call themselves “Jedward.” Their music — at least the small amount of it I’ve heard — is predictably terrible.

But look — I don’t have the time to rant about how awful their music is, or even how sick I am of pop music that relies on image-mongering at the expense of good songcraft. But I do have the time to rant about how this duo’s “act” is the closest thing I’ve seen to honest-to-God Nazi rally theatrics since you-know-when. Or at least the realization of every dystopian, sci-fi “rock star of the 23rd century” vision ever committed to film.

Don’t believe me? Check this out:

I have so many questions about this clip: are these two yucka-pucks even remotely aware of what they’re mimicking here?  Does their audience get the same thrill people experienced when the Fuhrer rolled down the streets of Berlin in 1939? Did President Obama ever lean over to Michelle and whisper, “what the FUCK were people thinking, making us sit through this white-boy Kid-n-Play-meets-Riefenstahl bullshit?” And, also interesting to me: I wonder how the money breaks down in the Jedward deal. Is it, like, a Broadway thing, where each show costs an astonishing amount of money, but the take at the door is $80/seat? Jedward certainly can’t float that kind of cash — so you know the producers are making out here. But where does that leave poor Jedward? And how do acts like Jedward progress artistically, once they’ve committed temselves to this kind of career?

Sorry this is unfocused — my mind is still reeling.