Tonight’s edition of Saturday Night Shut-In is bigger, better, and longer than ever! The roughly 33 minutes and 33 seconds of a typical episode can’t contain our year-end festivities. We’ll look back over the past year of growth and rock analysis. About midway through the program Mr. Moderator will conduct an exclusive telephone interview with a former Beatles’ associate and Apple Corps division head! Then Mr. Mod will make one final effort at interesting even a single Townsperson in the humble delights of Be-Bop Deluxe. All along the quest to reach 100,000 distinct visitors to Rock Town Hall in one month rages on. Tune in and see if you can’t do your part to push us past this goal!

[Note: The Rock Town Hall feed will enable you to easily download Saturday Night Shut-In episodes to your digital music player. In fact, you can even set your iTunes to search for an automatically download each week’s podcast.] 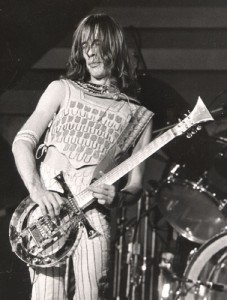 A recent discussion of Prock futurist Todd Rundgren got me thinking about well-known guitarists who play custom-shaped guitars. I’m not talking about guitars like B.C. Rich models that are a variation on a well-known guitar model, like a Flying V, but custom guitars made in a shape that especially suits the player’s identity. Also, the player needs to be an established pro guitarist, not some wacky dude who designed his own penis-shaped axe.

All entries must be accompanied by a link to an image of the player with his guitar. (Yes, bass guitars also count.)

Rundgren’s guitar, pictured above, is off the board. Play on!

Granted, there’s much that needs to be explained regarding Todd Rundgren, but can anyone explain Utopia? I’ve heard the occasional good song by that band (eg, “Feet Don’t Fail Me Now”), songs no different from and as enjoyable as the best Rundgren songs, but was the futuristic thing necessary?

This gets to a larger question: Excluding David Bowie‘s forays into space, which actually use space scenarios as a metaphor for the songs, has the futuristic thing ever been necessary or relevant? I’m not a sci-fi guy, so help me out. Has a rock band ever moved society forward by the powers of its space-rock-continuum concept album and/or offshoot band? Jefferson Starship was launched as one of these brilliant ideas, right? I feel like I’m missing some others. Although a totally different style of music, didn’t Sun Ra play the space card? Is it that much fun to wear sci-fi uniforms and play space-age instruments?

This news courtesy of Townsman cherguevara:

XTC Skylarking Better Than You’ve Ever Heard It Date:

In the course of world renowned mastering engineer John Dents [sic] work on preparing the new double vinyl set of XTC’s Skylarking for release, an interesting and wonderful thing has been discovered. John has informed us that that somewhere in the chain from Todd Rundgrens [sic] Utopia sound studio and Londons Master room studio, way back in 1986, a fault has occurred that means all of the versions of Skylarking you’ve ever heard, on CD or vinyl, have sounded…how shall we put this?… wrong. Read complete story here.

I usually cringe when I read about any significantly “restored-to-the-creators’-intent” reissue, but I’m a longtime XTC fan who’s always found Skylarking to sound a bit thin and cold. I always blamed it on a combination of Rundgren’s tight ass constricting Partridge’s increasingly tight ass, with an assist to Todd’s boy and former Tubes drummer, Prairie Prince. I’m curious whether any amount of added warmth and low tones will spark up some of the codified songwriting that has set in by that late date in the band’s career.

[NOTE: cher may have a different take on this and, most likely, can assess the veracity of the supposed technical glitch.]

I believe that in an ideal world, involving slight time travel and possibly Black Magic, The Move as produced by Jimmy Page to capture the band’s low-end rumble and provide space for Roy Wood‘s reedy tendencies, could have been a much easier band for me to sell to friends.

Check out this late-period song, “Ella James.” It’s melodic, it boogies, it’s hard rocking, and it has elements of Byrdsy jangle and late-period Beatlesy melodicism all the while reaching for The Power and Glory of Rock. However, the parts are not-quite-definted, and it you know the album version you may agree with me that, like just about everything The Move recorded, it’s a mess of a production. For a band led by two highly conceptual multi-instrumentalists The Move had trouble sorting through the details of their ambitious productions. They badly needed help.

Jeff Lynne would take The Move’s template and polish it up to nice effect for ELO, but I believe he avoided dealing with the parent band’s maximum heaviosity. Page would have known how to incorporate those elements while modernizing the band’s sound, making them more than a clunky version of The Who.

How I wish I could go back in time and make this so. What artist would you say needed the production skills of what producer? 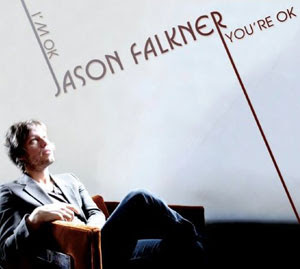 Jason Falkner‘s album I’m OK, You’re OK, which came out in Japan in 2007, is getting released in the U.S. this week! It’s streaming here for now. It’ll probably be up there only for a few days, so get at it while you can, Mr. Mod… I dare you!

Of course, those of us who actually, like me, enjoy some Jason Falkner music — Hrrundi, Alexmagic, etc. — are also welcome to give a listen. So far, it’s okay. Not mindblowing, though the song “Stephanie Tells Me” is pretty nifty.

Not a lot to say, but I thought the Hall’s Prock enthusiasts might enjoy this, especially Travelin’ Townsman Hrrundivbakshi.