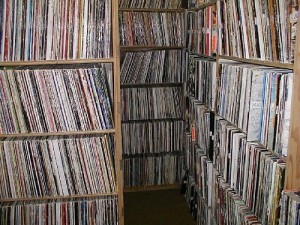 Can't get enough of your love.

I’ve said it before and I might as well lead off with it here: I’m an acolyte in the Church of 1983. As in, there’s been no good music since 1983. I’m not a fundamentalist though; pre-1983 artists have put out good music since then. And, like a blue moon, every once in awhile some post-1983 artist sneaks through (although off the top of my head I can’t think of anyone).

My solution in the last decade or so is to go back to the past. Back to other genres like country & western. Today, for instance, I ordered 3 volumes of Bear Family’s Dim Lights, Thick Smoke, & Hillbilly Music series. And yesterday I got the Bear Family Jerry Lee Lewis Sun box. (Aside: I was prompted to do that after seeing Jerry Lee’s guest appearance on TJ Hooker. Absolutely fantastic performance in some little honky-tonk set scene and far better acting in other scenes than anyone else who has ever appeared on that series.) Or jazz; I’m about ready to pull the trigger on the Mosaic Coleman Hawkins box.

Or I get tempted by PR hype and reviews of artists from my sweet spot (aka, up to 1983) and decide to see if maybe, just maybe, I missed the boat on something or my tastes have changed. This has led in the last years to getting most of the Roxy Music and ELO catalogues, among other more dubious, less rewarding, purchases.

The latest temptation comes after reading the latest issue of Record Collector; this had a very nice article on Bear Family that spurred recent purchases. But it also had an article on Willy DeVille, about whom I knew very little. Article sure made him sound like something I’d like and shouldn’t have missed. I’m certain I’ve heard a few songs on comps but I sure can’t recall anything about them.

Any advice from the Hall of Rock? Yeah or nay on Willy DeVille? If yeah, where to start? Any suggestions for other neglected pre-1983 artists I can indulge my habit with?