Over the years I’ve thought I wanted to delve more deeply into George Harrison’s solo catalog. I know what the general feeling has been but All Things Must Pass is a classic by almost anyone’s standards. And Living in the Material World has enough charms that I bought the reissue a few yeas back to supplant the old vinyl copy. And I bought the big comeback, Cloud Nine, way back when and remember liking it well enough (even if I don’t remember too much of it very well now).

Over the last several decades I thought I should try some of the maligned records that came out between Material World and Cloud Nine but never had; after all, how bad could they be? Back a decade ago after George died a box set of all the Dark Horse material came out and that tempted me.

Thank the music gods that I resisted!

I recently borrowed the one disc Best of Dark Horse, 1976-1989, and it is stunningly pedestrian. There’s one cut that would deserve to go on a true Harrison best of, “Blow Away,” thanks to a stellar chorus. And I’d listen to “Got My Mind Set On You,” “Crackerbox Palace,” “When We Was Fab,” and “All Those Years Ago” all the way through if they came on the car radio (although “When We Was Fab” belongs more on an ELO album – and not a greatest hits ELO album).

And the other 10 tracks, well, if that’s the best of the Dark Horse albums then they must be horrible. I won’t subject any of you to any of them here; seek them out at your own risk.

Am I being too harsh? Why did he even bother putting out this dreck? And is there a worse Best of than this? No cheating on that last question; we all know Christopher Cross’ Best of sucks (at least I presume it does).

Between the stunning use of Badfinger’s “Baby Blue” in the conclusion to Breaking Bad, the end of a painful baseball season for my team, the most lopsided loss by my football team since 1972, and my first viewing of the above Gap ad, yesterday was certainly a Blue Sunday. At least I’m not a fan of the New York Giants.

I’m long past the days of getting outraged by the use of popular music in ads and I’m rooting as hard as anyone for Dhani Harrison to finally reach his potential as a reborn Let It Be-era George, but can this Gap ad be his last tantalizing stalling move? The “kid” is 35. Isn’t it time he takes a big step forward?

This got me thinking: Is there a solo George song that features a cool bass part? Surely there’s an obvious answer I’m missing or not hearing beneath Phil Spector’s crumbling Wall of Sound. Was George a bassphobe? Was he one of those guys, a guitar chauvinist pig, who thought the bass should stay in its place? I’m not blaming the bassists he used. Klaus Voorman, for instance, whose wife wouldn’t let him do an interview with us when we tracked him down a few years ago, did some spirited, memorable, if rudimentary work on John Lennon records. 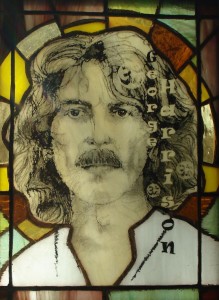 I’m finally getting around to watching this George Harrison documentary, having completed the first half on Independence Day. So far it’s great! I’m honestly shocked.

First of all it provides the one thing any Beatles-related documentary or book needs to provide: fresh images of my rock ‘n roll gods. I am pretty easy to please when it comes to Beatles things if I get to see new still photographs and film clips. It’s probably like the thrill some religious people get when they see a new stained-glass window depicting Jesus on the cross or whatever.

Second, the story starts by framing George square in his career with The Beatles—and it’s not from the Woe Is George perspective I was expecting. George is one of the boys, slowly developing his own perspective on the world through the band’s unique experiences. I put off watching this thing for the last year fearing that it would be produced from the perspective of the Mother’s Basement crowd, you know, those thumb-suckers who take the position that George was “screwed” all those years and that his true genius and equal standing among John and Paul finally came to the fore with the release of All Things Must Pass, including side 6’s underrated “Apple Jam.” Hey man, it’s cool that George is a hero to the quieter ones among us, but let’s be real when it comes to the balance of talent and drive within The Beatles. In part 1 of this documentary, George actually comes off better for his efforts, achievements, and examples of quiet leadership without Scorsese feeling the need to make him a victim.

A bonus delight, as far as I’m concerned, Paul McCartney has not yet come off as the glib, self-serving ass I’ve grown accustomed to seeing in these retrospectives.

I look forward to watching part 2. What did you think about this doc?

The topic for this post came to me today when I ran across this documentary (or is it a long-form ad?) about the Cry Baby Wah Wah pedal. I remembered George Harrison‘s song “Wah-Wah” from All Things Must Pass.

Wah-wah/You’ve given me a wah-wah

Now, I’ve read that George was using the term “wah-wah” to refer to a headache, which recording Let It Be with Paul in the director’s chair apparently gave him, literally or metaphorically enough to quit. But still, I like to think of the song as an ode to that piece of gear.

Are there other good songs about beloved musical equipment or instruments? Generic instrument references like The Beatles‘ “While My Guitar Gently Weeps” and Talking Heads‘ “Electric Guitar” (great lyrics, by the way!) are plentiful, but what about more particular instruments, like B.B. King‘s guitar “Lucille,” or specific items, like a Vox Amp or a Gretsch guitar, in songs?