END_OF_DOCUMENT_TOKEN_TO_BE_REPLACED

In this week’s edition of Saturday Night Shut-In Mr. Moderator welcomes a newly active Townsperson, then ponders life without REM… Not really, not the second part, but he does play two live tracks from the band, songs he can’t identify but hopes you can! It’s an odd show, as your host dips into some proto-post-punk and worries that he’s pissed off an old friend.

Although I certainly agree with the general gist of Machinery’s REM thread, and would, myself, add at least 10 years to his over-generous assessment of REM’s breakup being “15 years too late,” I think that framing such a discussion around  “relevance” is a mistake. No performer is going to remain relevant forever. Some great performers do not attain relevance while they are active, even. Relevance is largely irrelevant. What matters is the quality of the work. REM’s work after, let’s be generous here, Document may be more relevant than what came before, or it may be less relevant. I have no idea. Perhaps many people find “Everybody Poops”–er, “Hurts”–to be far more relevant than “Radio Free Europe.” I suppose there is nothing preventing a mawkish, bathetic, and dull-as-dirt song from being relevant to people.

Since of course the Stones have been mentioned, the problem with their post-Tattoo You (say) records is not irrelevance, it is shittiness. You might say that the two are related, but in all fairness, the best Stones record ever was not going to make them relevant in 1990.

END_OF_DOCUMENT_TOKEN_TO_BE_REPLACED 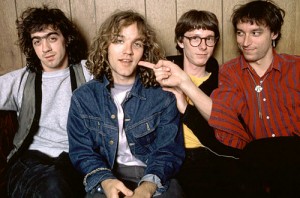 Not to be a hater here…but I can’t think of any band breaking up I could care less about. I mean, have they even been relevant for the last few decades?

So to frame it as a discussion: Are there other bands who shoulda called it quits a lot earlier than they did? Or still should? I’ll start: The Stones. Break up already. Please.

As you ponder this question, enjoy the battle of the network nimwits that plays out around the level-headed, mother-loving bassist.

The following post was submitted by my close personal friend E. Pluribus Gergely.

I’d like to get this whole thing settled…once and for all.

For years, the Moderator has been relentlessly jabbing at me for having the first three R.E.M. IRS long players in my record collection. Granted, I haven’t listened to them in years, but I decided to do just a few days ago. I’m here to to tell one and all that they are nothing to be embarrarassed about. They’re actually pretty solid. They feature a bunch of winners: “Gardening at Night,” “Radio Free Europe,” “South Central Rain,” “Pretty Persuasion”…all are tracks that still sound pretty friggin’ good. And “Rockville” borders on great. That’s right, great.

I caught them live as well, right around the release of Murmur. I saw them at the University of Pennsylvania, Bucknell, and the Tower Theater. They were phenomenal. Take a good look at the Letterman clips. That’s more or less what they looked like. To put it bluntly, they were cool, really cool, which is something that some of us (eg, Hrundivbakshi) refuse to admit is, was, and should always be a major point of criteria when judging a pop band. END_OF_DOCUMENT_TOKEN_TO_BE_REPLACED