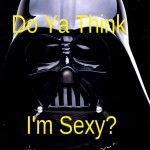 Anakin Skywalker never had a chance. Fawned over and treated as something special since a child, he became a somewhat churlish and petty, albeit supremely talented, young man who was vulnerable to the seductive promises of an older and evil mentor. Sure, we were led to believe that Anakin was merely trying to save his wife, but we know the truth—he sold out his principles for wealth, power, and the cool black uniforms and helmets that became his daily garb. So what if it cost a few limbs, most of his skin, and an internal organ or two? It was worth it—he was a superstar for the Dark Side and the ride was great for a while. Stuff like this happens to rock stars too…

Although I certainly agree with the general gist of Machinery’s REM thread, and would, myself, add at least 10 years to his over-generous assessment of REM’s breakup being “15 years too late,” I think that framing such a discussion around  “relevance” is a mistake. No performer is going to remain relevant forever. Some great performers do not attain relevance while they are active, even. Relevance is largely irrelevant. What matters is the quality of the work. REM’s work after, let’s be generous here, Document may be more relevant than what came before, or it may be less relevant. I have no idea. Perhaps many people find “Everybody Poops”–er, “Hurts”–to be far more relevant than “Radio Free Europe.” I suppose there is nothing preventing a mawkish, bathetic, and dull-as-dirt song from being relevant to people.

Since of course the Stones have been mentioned, the problem with their post-Tattoo You (say) records is not irrelevance, it is shittiness. You might say that the two are related, but in all fairness, the best Stones record ever was not going to make them relevant in 1990.

END_OF_DOCUMENT_TOKEN_TO_BE_REPLACED

This video is appalling on multiple levels.

The pointlessly rural setting, the various Look crimes – the beret, the overalls, the visor, the aviator shades, the peroxide – the objectification of women’s body parts, the exploitation of poor people, Rod’s preening and prancing… I could go on.

This style of Stonesy rock is what Rod had been successfully purveying with the Faces, but here it’s been perfected to death. It’s now drained of whatever vitality it once had and turned into a coked-out rock star nightmare. I hate everything about it.

I absolutely LOVE that guitar riff that comes in after Rod shrieks “I love ya, honay!” (first appearance at about 1:23). A two-chord riff with one repeat, it’s perfect in its simplicity, even it is a bit too Les-Paul-through-a-Marshall-amp. It just works.

Of course it’s immediately undercut by that dull, thudding drum fill from whichever Appice brother that is, but this little hint that Rod still knows what he’s doing confuses me. Does it almost redeem the song, or does it make the whole thing even more embarrassing by highlighting all that he’s thrown away?

Anyway, do you have a song or an album you basically despise which still has some feature or aspect you grudgingly love?

Here’s a FRIDAY FLASHBACK! topic from way back that might be worth extending with the input of our newer Townspeople. In the Comments for this post you’ll see that Hrrundivbakshi suggested an offshoot thread that’s also still worth exploring. The KISS Army Reunion referred to, by the way, was a pretty major event in early Rock Town Hall history. It may be worth seeking out that mid-February 2007 series of posts.

Enthusiasm for the KISS Reunion has spilled over to the parking lot here at the Valley Forge Convention Center, so keep those KISS comments coming. Something posted by Townsman hrrundivbakshi, however, caught my eye and warrants a discussion of its own. It has to do with the adolescent rock conspiracy theories that only a teen rock fan’s mind can get its, er, head around for a short time. In case you missed the comment, here it is:

Speaking of bands actually being other bands, I must share one of the funnier/stupider young teen music rumors that me and my friends all believed for a while: that Van Halen were actually KISS without the makeup. It was so obvious, from the backstory (Gene “discovered” Van Halen in a bar in California… yeah, *right*) to the revealing photos on the inner sleeve of VH’s first album. I mean, look at that picture of Michael Anthony scowling with demonic intensity! And you can’t tell me that happy-go-lucky photo of “Alex Van Halen” doesn’t capture the essence of the Cat Man! Now, “Eddie,” he’s, uh, Paul Stanley ’cause of the hair… though it’s funny that Paul didn’t play lead guitar in KISS… hm… I guess — I guess that leaves Ace. Ace is, uh, this David Lee Roth guy, I guess. Funny how he must have a completely secret life/talent set… you know, to be the lead singer and everything. Still, he’s a *rock star*, so, you know, anything is possible. Right?

This fantasy lasted about 3 days before we moved on to the next bizarro adolescent conspiracy theory.