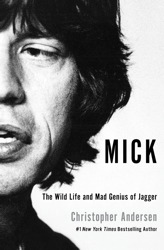 Our new BFFs over at Simon & Schuster, actually S&S imprint Gallery Books, has provided The Hall with 3 copies of this new release to give away. Our personal favorite review is:

So here’s how to qualify to win: Cast the movie. That’s it. Simply cast the Rolling Stones movie. You don’t even have to cast the whole thing. If your casting suggestion for just one of the roles is deemed among the 3 “best for that particular role,” you win.

The following 10 roles need to be cast. You can cast for one or all of them AND we have a TBD category. That is an 11th role to be cast that is as-of-yet undetermined. Example: Let’s say we were casting The Beatles movie and had 5 roles: John, Paul, George, and Ringo (seemingly always listed in that order) and George Martin. If there was a TBD category of your choosing you might suggest any of the following; Brian Epstein, Linda Macartney, Yoko, Magic Alex… Then if our judges were to pick your suggestion (both role and actor) then you win.

Get it? Got it? If not, post your question and an official RTH headmaster will respond.

The 10 cast members to be cast follow the jump!

23 Responses to “Dust Off Your Casting Couch and You Might Win Mick: The Wild Life and Mad Genius of Jagger”