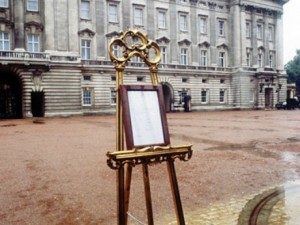 With the birth of a new Mountbatten-Windsor, the world is all eyes and ears about the development of the latest in the line for the British throne. As we have heard from recent posts by HVB, shaping the musical tastes of an infant is important…and difficult. But considering that this boy could one day have the power to rock the musical interests of a large island’s youth, I think we need to lend a helping hand. If we were to send our own care package of love and excellent musical taste, which thematically relevant tracks or artists would we recommend for Baby Royal? Would we include something from Prince? How about Royal Trux? I’d like to send along Madness’s “The Prince.”

I am particularly interested in the selections of Rock Town Hall’s British and former commonwealth friends.

I’ve been reading a Freddie Mercury biography this week, Mercury. It’s pretty good. The author can actually put together a few interesting sentences in a row, which I can’t say for too many biographers. The author and the people interviewed for the book all think Queen was great, a really important band. I still don’t like them beyond 3 or 4 songs. I tried listening to a bunch of their stuff last night, and each song reminded me of how much I thought they were stupid when I was a kid—and how stupid I thought all the kids were who were trying to convince me they were great. I will give them credit for being perhaps the most talented band that adds up to very little for me. Mercury, in particular, was an outstanding lead man. He was like Nicolas Cage and Laura Dern in Wild at Heart. Remember that turd? Nic and Laura acted their asses off to keep David Lynch’s latent effort at wearing a leather jacket halfway amusing.

Anyhow, the Mercury bio dedicates an entire chapter to the promotional film that launched “Bohemian Rhapsody,” one of many Queen songs that make me want to stick a fork in my mid-teens. Someone in the book even compared the video’s impact to the Kennedy assassination footage. I’m almost tempted to call that thing up on YouTube and watch it for the first time in years.

Instead I watched this fun video made by my favorite radio personality, WFMU’s Tom Scharpling. I sense the impact it will have on society will be somewhere between the Zapruder film and an airing of When Things Were Rotten. The song, by Nude Beach, fucking rocks. Scharpling and his partner in crime, Jonny Wurster, bring many belly laughs to my life. I’m always happy to do my part to spread their world. Enjoy.

I’ll pose two artists, one of whom YOU asked for, and you—love ’em or leave ’em—give me each artist’s representative 1-2 Punch. Dig? Here goes! END_OF_DOCUMENT_TOKEN_TO_BE_REPLACED

In our recent investigation of rock’s most pompous singer, Townsman and major Queen fan 2000 Man directed us to this delusional video clip on The Story of “Bohemian Rhapsody.” Already-forgotten bands like The Darkness proclaim the song as “the Holy Grail,” then go on to say that if anyone says they don’t like “Bohemian Rhapsody” they’re lying!

Well, call me a liar. I’ll argue that not only do I not like the song but that the song itself has almost no influence on anything that came after it. You could argue that the joy and flamboyance of Freddie Mercury was inspiring to some future gay (and straight) frontmen. You could argue that the band’s production techniques were influential on ’80s hair metal bands. But I don’t see how you can argue that “Bohemian Rhapsody” was influential on any song that would follow in the history of rock to date.

I could argue that the song completed work started by Paul McCartney and Wings through various cut-and-paste songs, from “Uncle Albert/Uncle Halsey” through “Band on the Run” and “Live and Let Die,” but once Queen so perfectly completed McCartney’s artistically suspect efforts, no band had a chance of following in “Bo Rhap”‘s footsteps. Queen was too good at that shit! Despite the fact that I can’t stand “Bo Rhap,” it’s a masterpiece of execution. But it’s not influential.

Are there other huge rock songs that would be, for whatever reasons, in no way “influential?”

Cleveland’s Classic Rock station polled its listeners to choose the 10 top rock vocalists, and I was shocked by the results. It’s not like I was expecting a list I would like from fans of this type of radio station, but nonetheless, I was amazed that Mick Jagger, Paul McCartney, John Lennon, and Janis Joplin didn’t make the list at all, and I never in a million years would have guessed #1. (When they got to #2 yesterday, and the above-mentioned four were not on the list, I assumed that Jagger would easily be #1. A coworker and I were discussing who had not shown up yet, and Freddie Mercury never once crossed either of our minds.)

Updated at page 3 with visual-free audio files for potentially less-biased consideration! (Courtesy of shawnkilroy and The Great 48.)

Let’s stop the nonsense, shall we? You don’t really like Sparks, do you?

Perhaps you were really into Queen as a youth and needed another band that was remotely like them in your collection? If so, that’s cool. No need to explain.

Perhaps you were totally into the Ice Capades and these guys turned you onto The Power and Glory of Rock? OK, I can see that.

But plenty of critics and rock ‘n roll fans whose tastes I respect LOVE these guys. Have I had the bad luck of only hearing the likes of my man, Townsman The Great 48, rave about them on April 1? Stop putting me on, will ya.

There’s a lot of music I don’t like – and damming faults that I find with a range of artists, but while deciding to look into whatever became of Billy Squier, I stumbled across what might be the worst song in the history of rock. Perhaps some of you know it, “Lady With a Tenor Sax”, a collaboration between Squier and Freddie Mercury.

What the hell motivated this? How much coke must these guys have done before lowering their inhibitions enough to crank out something this lame? If the song itself isn’t bad enough, try reading through the lyrics. END_OF_DOCUMENT_TOKEN_TO_BE_REPLACED