These albums, the Beatles and the Band ones in particular, first spurred my notions of rock superpowers. Comic books made no impression on me. Superman and his ilk were a bunch of squares in their tights and short, slicked hair. The members of my favorite bands, as pictured on albums sleeves, held remarkable powers. They were hairy and wore suede, denim, and sometimes even silk. Members of the Beatles and the Band, as pictured on their record sleeves, fit together perfectly. On record, their voices complimented each other while retaining distinct qualities. On record sleeves, their hairstyles complimented each other; their clothes were coordinated in a near-military fashion. They ran the range from handsome to homely, earthy to ethereal. Each band contained a dominant, bespectacled member, Lennon and Robbie Robertson, in the case of my favorite bands, who clearly possessed dominant intellectual powers.

At the same time these adult rock ‘n roll super heroes were being boiled down for kids my age in the guise of the Monkees and the Banana Splits, the latter being the first and only band whose official fan club I would ever join. My Dad built a wooden storage shed in our backyard, from scratch. His work was top notch and as deliberate and distinctive as Santana’s guitar solos. The white-with-black trim shed could have passed for a New England seaside cottage. The shed became my personal Banana Splits clubhouse, with my Banana Splits Club member certificate stapled inside the door. Sometimes I’d go out there, close myself inside the shed among the garden tools and paint cans, and do nothing but stare at that certificate, feeling the power of membership in a rock ‘n roll super group. 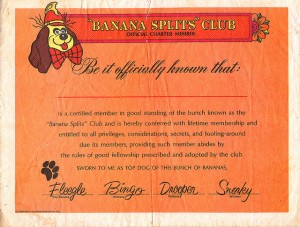 The record player was kept in what was originally our family’s spare bedroom, before my little brother, Joey, came along. He continued to want to sleep in the same room with me a few years after his arrival, when he was set up in his “big boy room.” The record player remained in what was supposed to be his bedroom, essentially our spare bedroom, until Joey finally settled in. Then he and his damn KISS cassettes took over the room. My brother’s stint in the KISS Army and failed attempts at reconditioning him are for another chapter.

When I was a young boy and had that spare bedroom all to myself, I could delve deep into the imagined history of the Band album, making personal connections to bits and pieces of songs that exist to this day. In “When You Awake,” when the narrator sits upon his Grandpa’s knee, I’m transported back to the knee of my Grandpop. The sense of death and mourning that runs through “The Night They Drove Old Dixie Down” is as chilling and resonant in me as an early childhood realization I had while being given a bath by my Mom. It’s one of my earliest memories; I must have been about 3 years old. I looked up at my Mom from the tub and blurted out, “Gran’s going to die someday.” Then I wailed.

The green record player wasn’t just a conduit for deep, heavy thoughts. I’d also spend hours happily rocking along to my “Snoopy vs the Red Baron” single, Vanity Fair’s rollicking “Hitchin’ a Ride,” and one album of what had originally been a double live album by Creedence Clearwater Revival. I never figured out what happened to the second album in that set, but at least I kept the album with the marathon boogie “Keep on Chooglin’.”

My home away from home listening space was my uncle’s bedroom. He lived with my grandparents, and as a young adult his bedroom was his home within their home. My Uncle Joe was the “hippie” of the family, relatively speaking. Like Mike Stivik, “Meathead” in television’s Bunker family, my uncle was deep down an old-fashioned family boy.

I wanted nothing more than to grow up and be a mustachioed child of the rock ‘n roll age like my uncle, especially after my parents took me to see a drive-in double-feature of Easy Rider and Hell’s Angels on Wheels. That night, sprawled atop a blanket spread over our station wagon with a neighborhood friend who came along for this unlikely family double bill, I was in hippie heaven. Although adventure-seeking, mellow misfits at heart, the hippies in these movies were nevertheless willing to stick it to The Man. It pained me in each movie whenever one of my new free-loving heroes was savagely taken down by hateful squares. The rednecks at the end of Easy Rider cemented my hippie sympathies. Although too chicken to this day to have ever ridden even a mini-bike, I’m on my own chopper, right beside them.