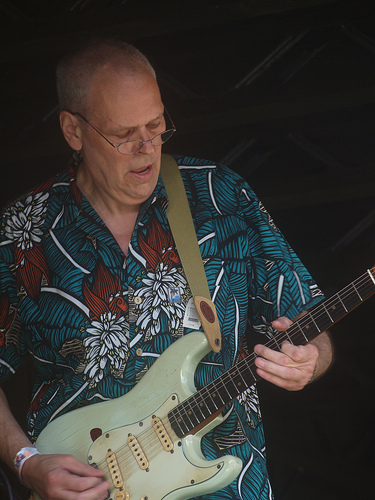 MB: I play live with about four different bands. At the moment I’m mostly working with a guy called Hank Wangford, he’s a kind of English country, sort of honky tonk/rockabilly – that end of country. And then I’ve also been working with Ducks Deluxe. We’ve got a Swedish tour coming up towards the end of March. And then there’s a couple of other bands: there’s a band called Los Pistoleros, which is a sort of offshoot of Hank Wangford which is a kind of Western Swing, jazzy – not very jazz, a little bit jazzy – like Western Swing but with country and rock ‘n roll in it, as well. And then there’s a band I play in called the Johnny Nicky Band. He’s one of the guys that sings a track on my album. He’s like a real old-fashioned, in the best sense of the word, soul singer. He’s like Otis Redding and Sam Cooke – he’s from that school. And he sings great. We all live close to each other – me, him, the bass player – and we just do local pubs, just to play music we like, which is kind of soul, blues, rock ‘n roll, and quite a lot of reggae. So that’s about my life’s work…I also teach.

MB: Yes, that’s the only thing I can teach. [laughs] When you get to my sort of age and the kind of music – there are people who will play anything, but unfortunately I only play what I like, and unfortunately what I like, in today’s scene is a kind of minority: what is generally called roots or Americana, which covers folk to blues to Cajun to Tex-Mex to country to rockabilly. That’s my roots, if you like, all that kind of stuff, prior to The Beatles, Bob Dylan, Elvis, Otis Redding…all of that stuff that I grew up with in the ‘60s. You can hear that stuff in Graham Parker. He’s like The Rolling Stones crossed with Van Morrison with some Bob Dylan… It’s a mish-mash.

RTH: And then you always had that reggae strain in there too, which so many of the British bands did but, but of course we never had.

MB: Yes, and that’s mainly because the vast majority of black folk in England are from the Caribbean. And there was that company Island Records, which was set up by a white Jamaican, Chris Blackwell, and he kind of broke those bands through to a bigger stage, particularly Bob Marley & The Wailers – there were several others. So we just heard reggae all the time – and its forerunners, like bluebeat and ska. 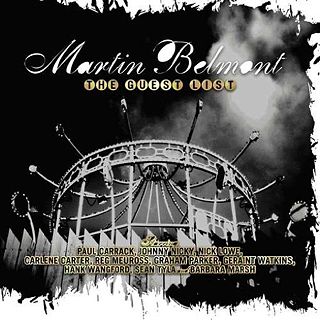 RTH: Right, that’s always been music we need to play catch-up with. I want to ask you about how The Guest List came together. I like the album a lot. As a listener it’s a great way to catch up with some artists I first heard long ago, some I did not know what had become of since then, someone like Paul Carrack, who I haven’t heard since the time he toured with you and Nick Lowe.

MB: Yep, that was me, Paul, Nick, and Bobby Irwin was the drummer. Before that we had a bass player as well.

I’ll tell you how The Guest List came about. Originally, way back in ’95 I did an album called Big Guitar, which was basically just me with some instrumentals that I’d written, because I can’t write lyrics to save my life. But occasionally I come up with a reasonable tune. So I did these kind of tunes, they were kind of like themes from imaginary Westerns. And I’ve got this baritone guitar, so it’s like a big twang. That was fine, and then I just went back to playing as a sideman, which is what I do, basically. Then about 3 or 4 years ago I had a few more tunes that I’d written. The drummer I’ve been playing with had a home studio, basically a laptop with some outboard stuff. We started laying down a few tracks, just drums and acoustic guitar. I happened to be talking to Dave Robinson [ie, Parker’s manager, Stiff Records founder] – I’ve kept in touch with him over the years and we’re still friends – and I told him that I was putting together some more instrumentals. He said, “You know what you should do, you should ask all the singers that you ever played guitar for if they would each come in and sing a track.”

I said, “Oh, don’t be ridiculous! They’re not going to want to do that. I’d be too embarrassed to ask!”

He said, “Don’t be stupid, just ask.” And of course everybody said yes. But it did take the best part of 3 years to do. But, it wasn’t like Bruce Springsteen making Born to Run. It was 3 years of an afternoon here and then a couple of hours 3 months later. If you put it all together it probably took a about a month, but spread over 3 years.

There were two people who I worked with, more than just an odd session, who I couldn’t get. One was Elvis Costello – we just never found the time because he’s living in America and he’s always doing something. The other was John Hiatt, who almost joined Nick’s band, in fact he was in Nick’s band for about 6 months. You know John Hiatt? Great songwriter!

RTH: Sure. Is this what led to Little Village?

MB: That came later. That was after Nick and Jim Keltner and Ry Cooder did a John Hiatt album, Bring the Family, a fantastic album. Then they decided to form a band, and it wasn’t that great. I saw them live, and of course they’re all great players: Ry Cooder is one of my absolute guitar-playing heroes, Jim Keltner is one of the three great drummers of all time, but as a band, when it was like four equal parts, there was never any focus. Whereas when they were doing a John Hiatt album there was a focus, because it was John’s latest batch of songs. So I saw them live and it was OK, great playing and everything, but I didn’t think the album worked well and neither did they. They knocked it on the head quite quickly.

Oddly enough Ry Cooder has just been touring with Nick again. He did an English tour and did some Australian dates. I saw them in Liverpool and it was just absolutely fantastic. It was just Nick, Ry, and Ry Cooder’s son, Joaquin, was playing drums. And it was supposed to be Flaco Jimenez, originally, but he couldn’t make it, he was ill, so it was just a three piece, and it was wonderful.