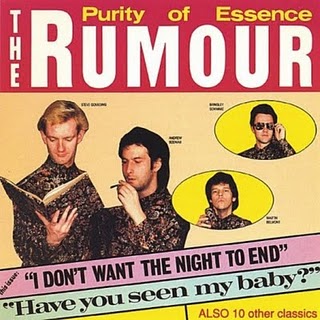 (Front cover of the Hannibal release – couldn’t find a big enough photo of the back cover shot.)

MB: I guess it was in the plan because we were sort of a band before we met Graham. Funnily enough, we’d written and arranged a couple of covers before we met Graham, and Bob, the keyboard player, wrote a couple of songs. We worked out all of these, and in actual fact the very first gig with did as Graham Parker and the Rumour, where nobody knew Graham Parker from Adam, but people in The Rumour were better known than Graham, we used to do this very bizarre thing: we used to do a couple of Graham’s songs and then he’d go off, and then we’d do a couple of Rumour songs and he’d come back on. It was a really, really bad idea. We soon realized it, we soon realized that he was going to be able to do it. Because he’d never been in a real, proper band before, we were never sure, at first. You could tell he’s got good songs, but you were never sure… It was obvious very quickly we were much better off doing his songs. But we always needed an outlet for doing our own stuff. Over the course of the years we were together we did three Rumour albums, which were a mixture of original songs and covers.

RTH: I’ve got two of them: Purity of Essence and – it’s such a tongue twister – Frogs, Sprouts, Clogs, and Krauts.

MB: That was our tip of the hat to the European economic community. It’s a terribly, appallingly sort of English thing, but it sounded like a good title. Do you know where Purity of Essence came from? [I do not.] It’s from one of our all-time favorite movies, Dr. Strangelove. It’s one of those movies we used to watch on the bus when we were touring America. We’d watch it all the time, so everybody knew every line in that film.

Frogs, Sprouts, Clogs, and Krauts was the second one. The first one we did was called Max. Do you remember Fleetwood Mac? They had an album called Rumours. “We’ll put out an album called Max!” Gosh, weren’t we witty?

We recorded Purity of Essence twice. We recorded it once, and it was released by Stiff in England and Europe. Then a company called Hannibal, Joe Boyd’s company, were going to put it out in America, and Stiff wanted like $10,000 for it. They said, no, and I said, I’ll tell you what: record it again, it’ll be cheaper. So we recorded it twice and there are actually two albums. We recorded some new tracks for the second version that aren’t on the first version.

RTH: I didn’t know there were two versions; I’ll have to see what version I have. [Hannibal US release.] Mine has that hilarious cover with you wearing paisley shirts on a paisley background.

MB: Yes, that’s right. Now that was the original cover for the original, English Stiff record. I can’t remember what tracks are different…Hold on, I need to see what version I have myself. [He reaches back to his CD shelf to see if he can clear up this question. He seems to be looking through the Graham Parker section, for those nerds among us who may wonder, as I observed, if he files the Rumour albums under P, with Parker, or R, for Rumour.] I don’t have a copy of that one.

RTH: Speaking of albums recorded twice, what is the story with Stick to Me, did you really have to record it a second time, or is this story apocryphal?

MB: That wasn’t our fault! What happened was, we recorded it at Island Studios – not the famous Island Studios in Basing Street, where The Wailers, Free, and Cat Stevens and all those other Island acts were. But they opened up a second Island Studios in West London, and we went in there with a producer, I forget his name now, and recorded that album – the same tracks that are on it now. And it sounded absolutely sensational! A load of money was spent: there were string overdubs, there were horns, we got in extra female backing singers. There was a lot of money spent on it, big production. Then, when the tapes were played in other places, it didn’t sound right. The sound was all wrong. It was muddy, the EQ was all wrong. I don’t know how it all quite played out, but what we were hearing coming back through the speakers at Island Studios was not what was going onto the tape. And in the end there was a big fuss about it, because Dave Robinson said, “We won’t be paying for this!” and they said, “Oh, yes you will!” In the end it was settled by an acoustic expert, who came down on our side. There was definitely something technically wrong with the studio, and it was also considered the producer’s fault for not checking whatever.

So we were booked to go out and do gigs straight after, and we did a whole lot of gigs, during which time we played most of the tracks live, so we knew them backwards. Then we went back into another studio with Nick Lowe, Mr. Not Hanging About, and we did the entire album – strings, horns, and backing singers – in a week. But that is the story. The album got very mixed reception; some people thought – the classic phrase was “grimy and blurred.” In fact Nick was going to call his records Another Grimy and Blurred Production. Other people thought it was a great record. I think the songs on it are great, and I think it sounds fine. It’s not the best of the albums we did, but it’s certainly a good album. 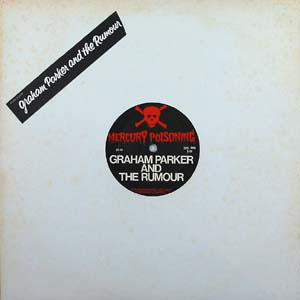 At that time, when that one came out, 1977, we were starting to have big problems with our American record company, which was Mercury. They did nothing for us. We did these back-breaking tours of America: six of us in a station wagon, two people facing out back. It was just awful. In the middle of winter of 1976, minus 20 in Minneapolis, and these jerks from the record company would turn up – we were doing Heat Treatment at the time. They’d say, “Listen, we’ve got this great promotion!” And their promotion was an electric blanket with Heat Treatment stamped on it. They were doing nothing. So it got to the point where we did another American tour in ’77, it was getting worse. The following year, ’78, we didn’t do an American tour. We went to Australia and New Zealand and a couple of other places. We released the live album to fulfill the contract with Mercury. Graham made a song called “Mercury Poisoning,” but they didn’t put that out. And then we signed with Arista.

RTH: I agree with the two albums you cite as the best. Each one has a strong identity. They sound like they came from a particular time and place.

MB: The first album of anybody’s got to have a good backlog of songs. The tricky second album is always the one that’s hardest. As Graham says, he was basking in the glow of the critical reception of the first one and going out touring, and then they said, “Well, what have you got ready for the second album?” And he said “What?!?!”

The second album had some good songs on it, but it’s not my favorite, mainly because of the production. It was recorded with a guy called Mutt Lange, who went onto become one of the world’s most successful producers – wouldn’t you know it! AC/DC, Foreigner, and his wife, Shania Twain. Co-wrote that Bryan Adams’ Robin Hood song… Just sickening!

RTH: At least he has one good album to his resume.

MB: He did the first Rumour album as well, and he mixed the live album, Parkerilla.