Our chat was like this, full of short, animated detours about various artists who still thrill Belmont to accomply or simply to see and hear. We returned to discussing the round-up of contributors to The Guest List.

MB: Carlene Carter, for example, who I hadn’t seen for 20 years – we were really close, I nearly married her sister. She was, of course, married to Nick. I got in touch with her, and she said, “Yes, I’d love to do it, but I don’t know how we’ll work it out.” As it turned out in the summer of 2007 she was doing a couple of festival in Scandinavia, and instead of flying back to the States she flew to London and spent the day in the studio with us, and did that wonderful track that her Mum had written, who I also knew very well and was fond of – and had died the year before or so – she died before Johnny.

The only one that wasn’t done with all of us in the same room was Graham’s. He sent me a sound file of himself singing, strumming the acoustic guitar, and playing the harmonica, with, you know, that Bob Dylan harmonica holder thing. And we just played along with it. 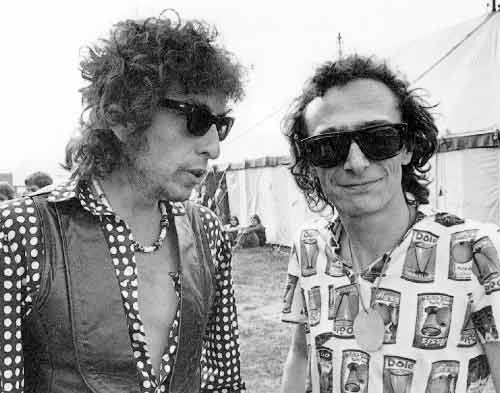 What was and what also should have been.

The rest of the album was done as live as possible, as much as we could we did it live in the studio or, in some of the earlier tracks, in the drummer’s kitchen. Nick Lowe’s track was done live in the kitchen, everything, no overdubs – one acoustic guitar overdub, but that was it – and I think that shows, it’s got that feel that you only get recording like that. No click tracks. No drum machines. Verboten!

RTH: Like a lot of rockers from your generation you’ve noted that Elvis Presley was the beginning for you. A few years later, when the British Invasion bands hit, how did you feel about that, growing up with American rock ‘n roll first?

MB: The thing was, pop music doesn’t mean a lot before the age of 10 or 11. At that point that would have been about 1960, and I discovered Elvis Presley and that kind of stuff. But by that point he already went into the army. The very first record I ever bought, or got my mom or dad to buy me, was “Jailhouse Rock,” which was from 1957, but was the most exciting sounding thing. [Sings opening line.] That voice just tears into you, like nothing I’d ever heard before. But at that same time, in 1960, there was an awful lot of shit. I think Dylan said this, it was like every other singer was called Bobby: there was Bobby Vinton and Bobby Vee and Bobby Rydell… And then, of course, when The Beatles showed up, in 1962, I would have heard “Love Me Do” and then “Please Please Me” in ’63, that sounded so, so weird. It didn’t sound like anything else. It just sounded weird, and I didn’t get it straight up, the first two records. Then, when “From Me to You” came out I got it, and that was it. The Rolling Stones, of course, made the next big splash over here, and then there were all the others.

It’s funny, because I know you guys call it the British Invasion, but a lot of those bands that got very big – if not for very long – but very big in the States: Herman’s Hermits, Dave Clark Five, all those bands… The Beatles and the Stones were in a completely different league than those guys. Those were just sort of pop bands.

RTH: Yeah, the others all got lumped in.

MB: Yeah, they were all British and they were all having big hits over there – and let’s face it, a lot of them were having hits with American songs. The same thing happened when blues started to take off over here. You’d get Manfred Mann and the Stones, of course – all these bands doing songs that a lot of white teenagers in America never heard: Muddy Waters, Howling Wolf, and those guys.