Who’s making love to your old lady and other questions. 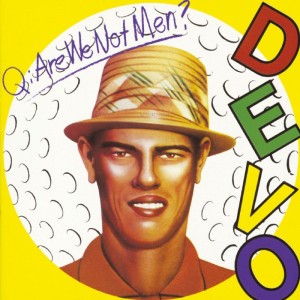 What is the name of this album? 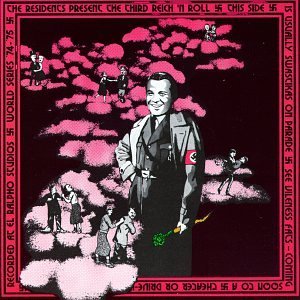 The great thing about Devo was that you didn’t have to listen to their music to love them. Their appearance on Saturday Night Live, where they performed “Satisfaction” and “Jocko Homo”, complete with the coordinated robot moves, the Booji Boy routine, the yellow HazMat jumpsuits, and a fuzz box mounted directly on one of the guitar players’ guitar, was the atom bomb of the rock ‘n roll age as we knew it. With that appearance, the release of their album, and their spectacular, absurd videos, they launched the eventual MTV/hip-hop-era attack on the value of Brill Building-based song structure, the blues tradition in rock, and perhaps music itself.

Did anyone really listen to a Devo song for the song itself? Sure they had some catchy songs and put a minimalist, repetitive spin on the classics, but without the arch theories and choreographed stage and video presentations what are they but Neil Young’s Trans? Lord knows a generation of rock nerds has wasted time trying to defend the merits of that album the way that generation’s rock nerd big brothers wasted time defending the merits of The Beach Boys’ Love You album, but that’s neither here nor there.

Try turning down the volume on a Devo video someday – turn it all the way down – and tell me if the images onscreen aren’t just as powerful and the song isn’t just as good. Try listening to a Devo record with the volume turned all the way down. Just look at the album cover and read an old interview with Mark Mothersbaugh about the philosophy of de-evolution. The album is just as good as if you had it cranked up.

Turn down the sound to the following video before watching, and see if you can calculate how little enjoyment you lose.

In the decades that would follow the appearance of Devo, the music itself would become secondary, then tertiary to the marketing campaign, the video, the overall buzz. Justin Timberlake puts out a new album, pop culture feature stories and cover shots are booked, the little girls understand, old white guys at laptops hammer out praise using ’00s hipster lingo, and JT videotapes himself live at the GRAMMYS! This is the onanistic world Devo imagined and helped usher in. They accepted our necessary de-evolution and aided nature in having her way. 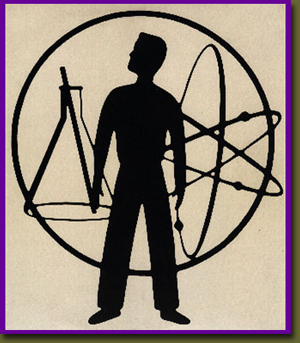 I’m stepping out from behind the door of The Back Office, this one time. And yeah, I know, “the computer guy likes Devo”, ha ha ha. In my highschool there were freaks (outcast, tough kid, pot smokers), geeks (outcast, wimpy-smart kids), and jocks. I was a geek for sure (albeit a film-making, pot-smoking one.) We had an overlap outcast thing with the freaks and oddly our groups coupled more than once. When punk emerged, I felt a place for myself as both an outcast and a geek. And if you look at early Talking Heads, XTC, Modern Lovers, and others, the scene originally had a place for the outcast, arty, geeks.

But unlike Talking Heads, XTC, et al, Devo was more than a band. They were a satirical pop-art piece: aural, visual, conceptual. The whole is better than the sum of the parts. No argument. But that doesn’t mean they didn’t put out some cool tunes that stand up and more than perform their duty now for the future.
END_OF_DOCUMENT_TOKEN_TO_BE_REPLACED

Townsman Trolleyvox hipped me to the following performance of a young Billy Preston doing a version of the song your Moderator believe best satisfies the objectives of rock ‘n roll:

That’s right, if you haven’t heard me on this already, I believe that no song better satisfies the objectives of rock ‘n roll than The Rolling Stones’ “Satisfaction”. Every now and then I stumble across another version of this classic, and when I’m not dazzled by the outrageous treatment of the song (eg, both The Residents‘ and Devo‘s versions) or horribly offended (Cat Power‘s version), I’m usually about as unimpressed by versions such as Billy Preston’s as I am Otis Redding‘s version.

I know, I know, rock nerds – Mick and Keef wrote the song for Otis – but the black artists I’ve heard cover “Satisfaction” can’t get to the song’s cool and sly teenage rage. Otis belts it out like he’s expecting the exhaltation of a heavyweight boxer who’s gone the distance against The Champ. Here, Billy Preston just has fun with what the song has to offer. He’s satisfied. He’s not fooling me. Granted, those sorority girls who come out to dance in front of him and the band don’t help matters.

I can say that it’s a good thing the following dynamic duo is not documented having covered “Satisfaction”: