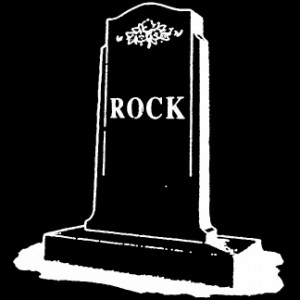 On the way to the Phils game last night (don’t get me started) we were listening to the classic rock channel. My wife turned to me and said “Rock is dead.”

Although I nodded silently, it struck me how heavy and huge a pronouncement this was. And, I’m sad to say, pretty true.

I know I’m out of it, but I do try to keep up with a lot of music the youngin’s are listening to these days—mostly through my own kids. They’re pretty much up on a lot of stuff—but nothing is what I’d call Rock with a capital R.

I know it’s a broad term—and there are some throwback bands doing all sorts of rock derivatives. I, for instance, like what small amount I’ve heard from The Hentchmen—but they are throwback garage rock.

No, what I’m talking about is Power-and-Glory Rock. Anyone (besides some stuff I’ve heard from Jack White) doing this sorta thing nowadays?

Or is my wife correct? Is Rock dead?

What are you listening to these days? While we may be inundated by suggestions for beach reading, grilling recipes, and refreshing beverages, I’d like to hear more about what you all are listening to during the heat wave, your holidays, your longer daylight hours. It’s the summer and for me it means more time to explore bands I’ve been meaning to catch up on or learn more about. So here are 2 that I’m totally addicted to these days:

Mr. Royale has been sneaking tracks from this Brooklyn 4-piece onto music mixes he’s been making for me, but it was this track that really turned things around and made me join the cult:

This is 8:06 of The Power and Glory of Rock! We start with some Neil Young “Southern Man”-style guitar, and move into a psychedelic guitar lead that winningly reminds me of one of my favorite covers, Camper Van Beethoven’s version of Pink Floyd’s “Interstellar Overdrive.” Two minutes in, the beat picks up but then is followed by a teasing lull. However, the volume kicks back up and at 5:18, The Men are in full swing and even add cowbell! I’m imagining the group of them head banging in tandem and this continues with some extra psychedelic guitar noodling thrown in for good measure. This music IS everything and the kitchen sink!

Whereas The Men are very overt with their influences, my other music addiction these days could be described as True Originals:

END_OF_DOCUMENT_TOKEN_TO_BE_REPLACED

This very cool clip of The Move in action comes courtesy of Should-Be Townsman Jay, on whose behalf we ask you to share your heavy thoughts, man.

Can you handle more?

You KNOW what I’m talking about!

Who says female-fronted bands can’t tap into the Power & Glory? As one of the YouTube commentators wrote:

Rock Town Hall seeks THE most powerful and glorious example on video of The Power & Glory of Rock. This is a Battle Royale. Winner takes all! Let’s start by seeing if we can’t top the Power & Glory of The MC5 playing “Kick Out the Jams,” as submitted by Townsman Hank Fan.

In 2001, Billy Corgan, Smashing Pumpkins drummer/sidekick Jimmy Chamberlain, and members of Slint, Tortoise, Chavez, Toto, and A Perfect Circle, and launched Zwan, a Tin Machine-like “this is a real band, mannnnnnn” supergroup. (OK, maybe no one from Toto was involved.) The band released one album, Mary Star of the Sea, in 2003, before breaking up.

To my ears, in limited exposure, Zwan sounded a lot like Smashing Pumpkins. To my eyes, the bassist was a notch hotter. Until now, I had no idea the band’s full name was initially True Poets of Zwan. That fact notwithstanding, is it time we revisit Zwan for consideration of a Critical Upgrade, wouldn’t you agree?
END_OF_DOCUMENT_TOKEN_TO_BE_REPLACED