Has anyone caught the Cameron Crowe-directed documentary on the Elton John–Leon Russell collaboration that premiered on HBO last week?

I am an unabashed big fan of Leon Russell. I think his early ‘70s albums were as good as it gets. (An early RTH thread on best string of albums probably didn’t mention Leon Russell, Shelter People, Asylum Choir II, and Carney but should have.)

I always liked Elton John’s early hits and had his first two albums. He’s also an artist that I have grown to like more and more as time passes. Back about a half-dozen years ago I bought all the early albums when they had the reissues cheap at the BMG club and was pleasantly surprised by just how much I liked them.

So, not unsurprisingly, I greatly looked forward to The Union, the Elton-Leon collaboration that came out in late 2010. And if it wasn’t as great as I wished it might have been, it was a lot better than I feared it might be – and that’s not as much damning with faint praise as it sounds.

I greatly enjoyed this documentary. It’s really Elton’s show but then so was the collaboration. The backstory, for those who need it, is that Russell was a great inspiration and hero for Elton way back when. They hadn’t been in contact for decades and somewhere along the way Elton became aware of Russell’s circumstances—Russell’s apparently pretty much broke, playing small clubs, health issues—and Elton wanted to get him the recognition he (John) feels he (Russell) deserves.

END_OF_DOCUMENT_TOKEN_TO_BE_REPLACED

My wife seems capable of singing along with the lyrics to any song on the radio, even Elton John songs. I’ve always found him to be the most difficult singer to understand in rock, even more difficult to understand than David Bowie. Thank you, Volkswagen Passat.

In other rock-ad news, what’s your reaction to Devo doing those “Drink It” radio spots for Pepsi?

Finally, speaking of Pepsi, can anyone clear up if it was The Hawks or The Band playing on the following movie intermission ad?

END_OF_DOCUMENT_TOKEN_TO_BE_REPLACED

As many of you know, I (Rock Town Hall’s own sammymaudlin) suffered a “traumatic brain injury” on February 16 of this year.   It was really just a freak accident. Sadly no drugs or alcohol were involved. Even though I only fell in my hallway the “scale” of the fall was recorded as that of a “backwards fall from a 2-story building.” I was induced into a coma for 2 weeks to control the brain swelling. And to boot, my 12-year-old son’s appendix burst while I was holed up in a hospital for 6 weeks.

Anyhoo…It was quite the stressful time for both my family and me.

So many folks came to our aid with supportive emails, snail mailed cards, financial contributions (Q: Ya know how much money a self-employed guy makes when he can’t work? A: Zip!), meals for the family, yard care… It was amazing and beautiful to see how many people did so much to help out. Without a doubt I now feel more connected to life, love, people, and more.

Blah, blah, blah. The purpose of this post is to personally thank my peeps here at RTH. The posted support, emailed support, and community/financial support via Sausages For Sammy was overwhelming and deeply appreciated. Many of you I know personally and my love for you is el grande. And many of the RTHers that helped out I have only met once and some I’ve never even met in person at all! For these folks I don’t so much take your support personally as much as I do a testament to this cool community that we have all built together. A place so great to many of us that when one of us was in need, you did what you could. The Reverend sums it best for me here: 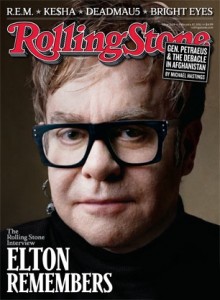 I saw a recent cover of Rolling Stone magazine featuring an interview with Elton John. “Elton Remembers,” reads the cover copy, as the formerly flamboyant Glam star soberly stares out at me with his million dollar weave and horn-rimmed glasses as humble as those he wore during his 1970 tour introductory tour of America. I have not yet read this article, but I’m pretty sure I know what it’s going to focus on: the continuing process of John putting his rock ‘n roll house in order.

First, what must have been the commercially released video to accompany this star-studded cover of The Buzzcocks’ most-successful song. A list of the contributing artists appears toward the end.

Then, if the notion of the UK as a small, close-knit music community unlike anything we could imagine in the United States still hasn’t hit you, there’s the following, more mind-blowing homemade video: END_OF_DOCUMENT_TOKEN_TO_BE_REPLACED